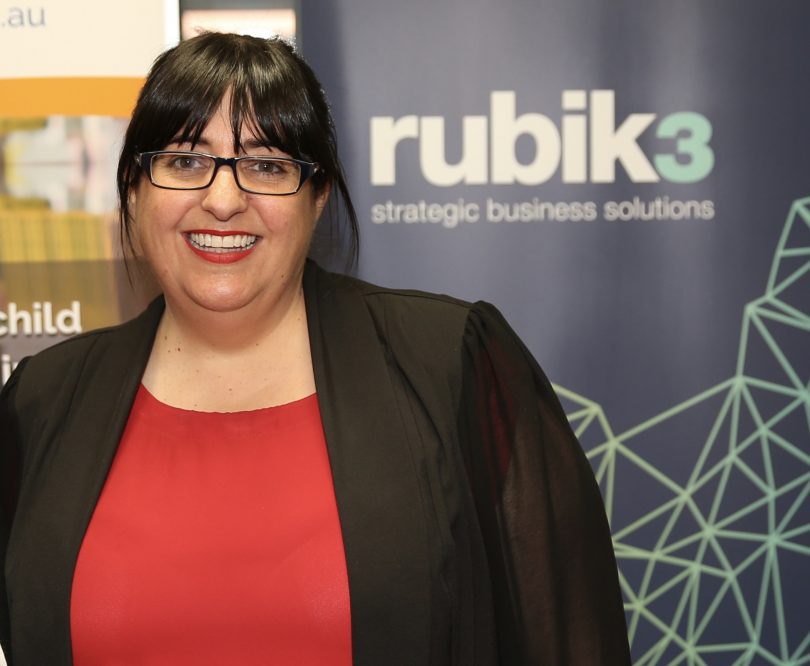 Rubik3 associate partner Nadia Pessarossi says her motto is “use your powers for good”. Photo: Supplied.

If you want something done, ask a busy person, so the saying goes. If that is the case, Nadia Pessarossi must get an awful lot done. “Sometimes life gets hectic and I don’t want to miss anything so I have to plan my days carefully,” she says.

Now an associate partner at Rubik3, one of Australia’s fastest growing and youngest business services partnerships, Nadia is a lifelong Canberran, who has risen through the business world from an early start as a retail trainee to emerge as an ACT business leader.

Nadia grew up on Canberra’s northside before moving to a rural property in Murrumbateman in her teens. “My dad wanted a rural life, so we moved out there but I continued at Merici College,” she says. “I caught the Transborder bus with all the other rural kids. It was a longer trip but we had fun. I met my lifelong best friend on that bus.”

At school, Nadia wasn’t sure what she wanted to do for a career. “I always talked too much at school and was more interested in having fun, but I did love history and the Australian War Memorial.”

She says small business is often an overlooked pathway to a successful business career, and her experience in retail was the perfect insight into business.

“I got a retail traineeship straight after school,” she explains. “That is where my passion for business was ignited. I learned so much. In retail, you learn everything from profit and loss to payroll, tax law, marketing… everything is covered. And you have to work hard.

“These days, when recruiting for a new team member at Rubik3, if I see someone has worked in fast food or retail, I see that as a positive. I really value it because it means business basics and a work ethic have been embedded.”

Nadia moved on from her retail traineeship to manage bigger retail companies and then joined the public service as an executive assistant at ACT Corrective Services, which led to a 10-year role at the Australian War Memorial.

“That was a dream job,” she says. “Combining my love of the War Memorial with running their commercial side. I was in charge of product development and retail, and was there for some really special events including the centenary of Anzac.”

Nadia left the Australian War Memorial to help charity organisation the Tara Costigan Foundation, which closed in 2018. “I felt that was an important step in my career,” she reflects. “To build a charity right from the beginning. I worked closely with Tara’s family to establish an organisation to support women who have experienced domestic violence.”

In 2017, Rubik3 founder and senior partner Guy Earnshaw offered Nadia the opportunity to work for his company. Being the only woman on the executive team, she saw an opportunity to use all her knowledge and skills.

“Rubik3 is known for growth; the challenge is to keep up with that,” she says. “My role is to support the Rubik team, interpret Guy’s vision and help build Rubik with the executive team.” Nadia says the firm’s growth has been driven by clients wanting more than just accounting services. “We are often asked by clients to provide advice on how to grow a successful business.

“I also work on our company culture and look after our young team. I think it is really important that everyone is happy at work. Rubik3 is like a family. Guy was recently asked why are we all so nice and kind – if you don’t value community and giving, then you don’t last at Rubik3.”

She says the fact Rubik3 is community-driven was an attraction from the start. “My motto is ‘use your powers for good’ and I can do that here. I get to mentor a lot of community organisations; you have to run not-for-profits like a little business.”

Nadia says most of Rubik3’s profits go to the community. “Rubik has given back from its inception, even when the business probably couldn’t afford it. We have continued that as we have grown and we now run community programs, including one for Indigenous kids.

“That gives me a lot of satisfaction. Helping, mentoring and building relationships is what my job is all about.”